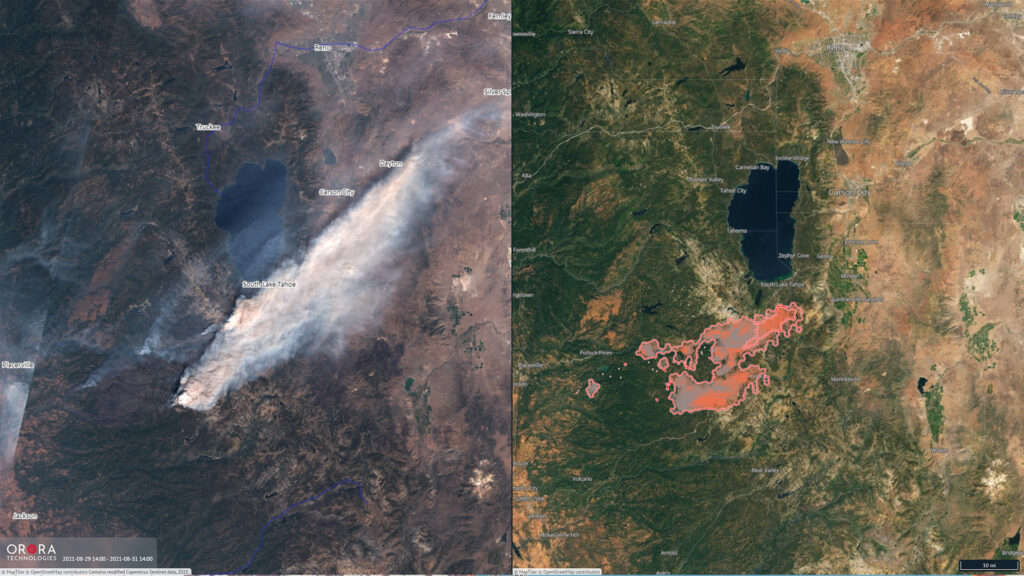 Co-founders Thomas Grübler, Björn Stoffers, Florian Mauracher and Rupert Amann came together in 2017 to work on a spin-off from the CubeSat project at the Technical University of Munich, with the idea of using satellite data to mitigate the impact of natural disasters. Supported by a research grant and the ESA Business Incubator, they founded OroraTech in 2018 and gained traction after the severe November forest fires in California later that year. They saw the increasing global wildfire issue and came up with the idea of developing a satellite-based wildfire platform to detect these fires faster and reduce the resulting damage and greenhouse gas emissions. Today, the company has grown to be an international team of 60 people from 5 continents, passionate about space technology and preserving the environment.

OroraTech aims to provide a service that helps keep Earth sustainable for all life and protect our already vulnerable forests. In the case of wildfires, they utilize thermal-infrared images from satellites in geostationary and low-earth orbit. Data from these satellites are designed to globally detect forest fires early and notify users who can execute their fire management plans to tackle the fires before they become a catastrophe.

The wildfire detection and monitoring service provide additional analytical features for fire risk assessment and forecasting. Using data on vegetation, weather, and topography, the service provides a base to encourage preventative measures to help preserve nature and biodiversity. Early detection and real-time monitoring are maintained due to the numerous satellite sources integrated into the service. Users can then afterward analyze the damage through burn scars and historical data of the wildfire hotspot detection in the area.

OroraTech combines thermal-infrared data from 20 satellites, ranging from NASA, ESA, NOAA, EUMETSAT, and JAXA, and visual overlays from ESA Sentinel-2 and Sentinel-3 satellites for validation purposes. In the past, fires were mostly detected using airplanes, helicopters, watchtowers, camera systems, and patrols on the ground. These methods can sometimes be inefficient and costly, especially in large and sparsely populated areas. OroraTech has taken a holistic approach to develop their wildfire management service by merging every available existing satellite data source and launching their nanosatellites, integrating ground-based camera data, and enabling users to classify fires within the platform.

This data is quickly processed through a cloud-based architecture and is accessible either through a browser-based WebApp or directly accessed via API. When a hotspot is detected, instant notifications of detection and location are sent to the user to act faster on a potential wildfire. The service also provides fire analytics for users to understand fire behaviors with various map forms, visualized fire charts, and historical wildfire data. While researchers can analyze the global dataset on fires, first responders can focus on monitoring their customized area of interest. The latest version of the platform is being used by commercial forestry companies in Chile, Argentina and Brazil, by wildfire services ranging from Canada to Australia, NGOs in Mozambique and the Amazonian, and global insurance providers.

OroraTech aims to reduce the social and economic damage associated with forest fires and reduce greenhouse gas emissions, helping to make a significant contribution to a more sustainable planet. Many wildfires are caused by humans due to carelessness or not following fire warning protocols, but last summer, we saw an increase of fire spread from lightning strikes and very dry vegetation. The Dixie Fire in Northern California was the largest of the summer breaking several fire barriers, requiring countless fire resources and personnel.

The core of OroraTech’s innovation lies in developing their CubeSats with miniaturized thermal-infrared cameras. Their satellites are designed with a  much higher temporal resolution than current operating satellites. The existing satellite data shows a large gap in the afternoon when fires are highly prone to start and spread. OroraTech’s satellites will fill in those gaps and be combined with all of the other data sources. Their constellation will be about 100 nanosatellites and help bring down average detection time to around 30 minutes – from several hours today.

OroraTech’s nanosatellites have a novel camera system for precise temperature measurement and an on-orbit processing unit. Once heat sources are detected by an AI-based algorithm onboard the satellite, the information is sent to the ground via an inter-satellite relay to reduce the delay significantly. This allows global forest fires to be detected at an early stage, fully automatic, and around the clock. With today’s NewSpace technology, OroraTech can make the satellites contain all of the instruments within a size of just 10x10x34 cm³, or the size of an average shoebox, compared to large geostationary satellites that can be as big as a truck.

CubeSats are inexpensive to develop in high numbers due to their small size, allowing rapid development with the commercial off-the-shelf materials used to build the hardware. Over the last year, OroraTech has been working around the clock to prepare for the first satellite launch, known as FOREST. They teamed up with US-based Spire Global to launch the satellite scheduled for January 2022 in Cape Canaveral, Florida.

OroraTech’s system is currently being tested by organizations in the United States to help them plan for the next wildfire season. After two back-to-back extreme seasons, OroraTech hopes to make a difference in protecting vulnerable forests and communities with their wildfire monitoring system. “Getting a grasp on forest fires as early as possible is a game-changer. We can provide the data to keep people out of harm’s way,” said OroraTech co-founder Björn Stoffers. “Watching fires devastate communities, and national parks should not become the norm.”

New features and data sets are implemented step-by-step as OroraTech maintains its vision of creating a more sustainable planet powered by information from space. They continue to expand existing collaborations with numerous universities, research institutes, and corporate partners focused on making an impact. To learn more about OroraTech and how you can access their wildfire detection and monitoring service, visit their website at www.ororatech.com.

The original article was published on Aerial Fire Magazine on January 7th, 2022